Bernardo Sassetti and his "Motion" Recording 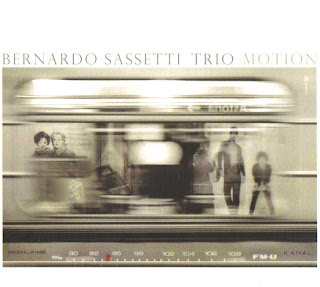 As I auditioned Bernardo Sassetti's new album Motion (Clean Feed 177) I caught myself thinking, "Some artists are so subtle, you actually have to listen to them." Then I thought, "What are you nuts? All artists must be listened to!" But, face it, some music is so predictable it almost listens to itself. You set your ears to the coarse grained sample mode. You pop the mental sampler on and register, "OK, there's a bop lick. . . yes, walking bass. . . .ding ding da-ding on the cymbals."

I had a heavy blues listening phase when I was young, and then went on for a while to other musics. Looking back at that time a little later I first thought that emotionally and mentally I needed something completely redundant and predictable because of all the change I experienced in my life in those days. Later, when I returned to the blues and kept it in the things I actively listened to again, I didn't feel that way anymore and by then I tried to listen to that and any other music at hand with the mental sample mode as fine tuned to "continuous" as possible in the world we are in today.

Clifford Geertz once complained that he could no longer entertain only one thought because the telephone would ring and. . . there would then be two thoughts. Nowdays having only the telephone as interrupter and only two thoughts seem charmingly quaint. There are literally hundreds of potential interruptions from computer internet activities and such. Multi-tasking is common and almost impossible to get away from. But still the idea that music must be heard continuously to be appreciated remains completely true.

So then back to Bernardo Sassetti's trio and their new album. Redundancy is very little in evidence. This is a pianist who takes Evans and Jarrett as stepping stones but then actually goes beyond those influences to be himself. And that self is richly lyrical, harmonically sophisticated, melodically profound, and not inclined toward repetition in any sense. His bandmates Carlos Barretto and Alexandre Frazao, bass and drums, hold tightly to the almost sacred eminence coming out of Sassetti's piano. They hold tight to what he does and really complement it.

There are strings of lusciously subtle ballads here, as well as some rock inflected or Latin inflected numbers, and some brief free type sojourns, even use of some "found sounds" electro-acoustically at one point. Everything is rather remarkable. It's so subtle and sophisticated that you cannot ignore it because you just won't get anything out of it at that level. Listen or just don't bother. If you do listen, you'll be in for one of the nicest and most original of the tonal piano trios out there. We reach levels of sublimity perhaps only the piano trio is capable of attaining. It's extraordinarily intimate, extraordinarily inventive. Extraordinary. I mean that.
Posted by Grego Applegate Edwards at 4:42 AM