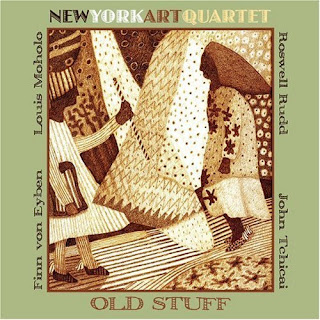 It's always an occasion when new material is released by an important band, when as you listen you realize that reasons for its unavailability over time have nothing to do with the quality of the music itself or the recording.

That's the case with the new issue Old Stuff (Cuneiform) by the New York Art Quartet. The band, headed by altoist John Tchicai and trombonist Roswell Rudd, made some of the most interesting music on the "new thing" jazz scene in the mid-sixties, then were no more. It was a group that featured the formidable two soloists in lengthy explorations, some fantastic interplay between the horns, interesting composed material and a rhythm section that burned away.

The story behind Old Stuff is that John Tchicai lined up some gigs in his native Copenhagen for the fall of 1965. The regular drummer (was it still Milford Graves?) and whoever the bass player was at the time (Reggie Workman?) could not make the trip, so the quartet was fleshed out with Finn von Eyben coming in on bass and Louis Moholo on drums. Von Eyben sounds fine on the recording and adds his own conceptual influence. However it is Moholo that changes the character of the band in an more dramatic way. He gives the band a totally different rhythmic base. Moholo's time was quite different from Graves: there is in the former a more linear poly-rhythmic thrust to the pulse that propulses the band differently yet still opens it up to an expanded sense of temporal possibilities. It gives Tchicai and Rudd support for more complex yet still free solo statements and they respond beautifully.

And so you get a long set of music drawn from two gigs they played during their stay that fall. The recording quality is excellent, as is the level of the music. It's a major addition to the NY Art Quartet discography and highly recommended!
Posted by Grego Applegate Edwards at 5:07 AM