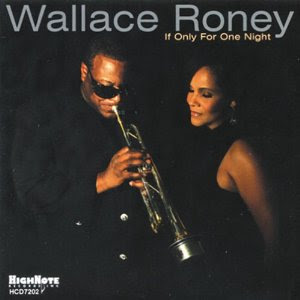 It's been a number of years since those who would be our musical spin doctors, trendsetters and what have you singled out trumpeter Wallace Roney as the flavor of the month. Such attention cannot all be bad. The artist gets more gigs and recording opportunities as a result. Once the dust settles, however, such an artist either continues to grow and make good music or falls back on a formula that he, she or the agent or record company feel is part of what got him or her all the initial attention. That can be devastating to the artist in the long run, surely. Thankfully, Wallace Roney has not fallen into that trap.

His new album If Only for One Night (High Note 7202) wisely puts him in a good live club situation, NYC's Irridium. He has his regular band in tow, which includes his eloquent brother Antoine on reeds and the hard-hitting yet subtle triumverant Aruan Ortiz, Rashaan Carter and Kush Abadey on piano, bass and drums, respectively.

There are some jazz standards, notably a very nice version of Herbie Hancock's "I Have A Dream," and there are originals. Wallace has the legacy of Miles in his bones, of course. But he consistently hits it harder than Miles in a typical period, though the Miles of Four and More has lots of that too.

He and his band have been growing though. This is excellent live jazz with all that entails. They are out to play and they do. There's enough fire for the NYC Fire Department to contend with. And there is an assurance in Roney's playing as well as the band as a whole. They are in that desirable category where "mainstream" only connotes an aspect of their connectedness to a tradition. It does not connote the careful cloning, polite whitewashing, or the playing it all for grandma approach some artists, too many alas, are apt to fall back upon for either security or due to a momentary (or permanent) lapse in the talent part of the equation.

No, Wallace Roney is mainstream only in the sense that he builds on what went before. And most importantly he does that with the essence of what jazz, especially live jazz, should be. A vehicle for self-expression, an instant form of communication, a conduit of the musical, mental and emotional self. Listen to the concluding, unaccompanied trumpet solo on "FMS." You'll get what I mean! I think most will find this a very worthy addition to their collection. It's brought hours of joyous enjoyment for me so far. May it do that for you as well.
Posted by Grego Applegate Edwards at 5:10 AM

Labels: jazz trumpet, modern jazz, review of 'if only for one night', wallace roney