Guarnieri's Piano Concertos Give Your Ear A Workout 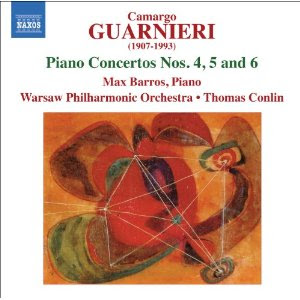 "The most important Brazilian composer after Villa-Lobos" the liner notes for today's CD tell us. Mozart Camargo Guarnieri (1907-1993) may well be that. I have had the misfortune to miss a decent performance of any of his works over the years. I still have a few recordings, made in the pre-stereo era, sounding like the orchestra was trying to play inside a soup can. (Or desperately trying to get out of that can!)
Suffice to say that I didn't get the full impact of his music. Until now.

The generous inclusion of the last three concertos (composed 1968-87) gives us an extended look at the composer in a sort of international modern framework. It's not music overflowing with South American folk strains. They are not well-known works, at least in the States, but they should be. No. 6, in fact, enjoys its world premier performance here.

If you love the modern style, this one will be a real treat. Bravo Guarnieri!
Posted by Grego Applegate Edwards at 4:12 AM