Bryan and the Haggards Take Country Music Out the Window 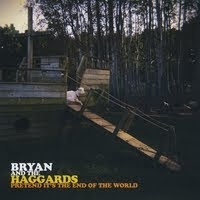 Every once in a while an album comes along that is so unexpected yet so interesting that you want to laugh out loud. That happened to me when I first put on Pretend It's the End of the World (Hot Cup 094).

The promo sheet that came with my copy of the disk proclaim the artists as "New York's Most Decorated Avant-Country Instrumental Merle Haggard Cover Band." Now if that doesn't bring a smile to your face, perhaps you aren't in a very good mood. Point is, though, this is the band "Big V Chord" under another name, with the leadership in the hands of tenorist Bryan Murray (as opposed to the usual leadership of guitarist Jon Lundbom). Everybody from that band appears here: the two just mentioned plus Jon Irabagon (as), Moppa Elliott (bass) and Danny Fischer (drums).

As you have gathered this is a sort of twisted tribute to country artist Merle Haggard. They do his songs in ways Merle may have found puzzling. Sometimes there's a relatively "straight" rendering. Much of the time the band veers off into the avant garde with searing free solos and the sort of high jazz rhythm work that has more in common with Ornette than the Grand Ol' Opry.

Now I happen to find this sort of thing exhilarating. I go for the sort of abrupt collisions of style universes that you hear on this recording. It's healthy for music and it's healthy for the listener to let go of the rigid compartmentalisation that has so prevailed in music consumption over the many years I know about.

Now it's not just that the Haggards do this tricksterish conflation of musical genres; they do it well and they do it with obvious affection for the original music. But they also maintain the integrity of their playing and arranging styles. That is a feat. Nothing sounds forced or contrived.

What it tells you a little about is that the "Great American Songbook" is much too narrow. Classic country, blues, soul, rock, you-name-it. . . so much has been excluded from this imaginary monument to "great music" that redefinition is in order. The status quo, as always, needs shaking up now as much as ever. And I give lots of credit to these guys for doing just that. Plus it gives you a musically enriched program. . . and it's FUN!
Posted by Grego Applegate Edwards at 4:56 AM

Labels: avant jazz, bryan and the haggards, country-jazz-avant-fusion, merle haggard covers, review of "pretend it's the end of the world"