A Compelling New Version of Corigliano's "The Red Violin" 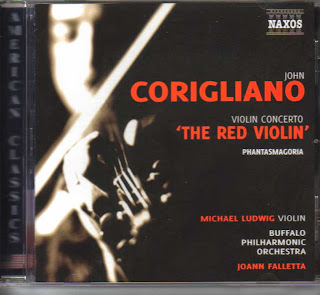 Composer John Corigliano is a musical mind, as it were, so inventive and lyrically endowed that listening to his best work transcends period and style. One forgets to gauge the music in the context of our current century and rather loses oneself in the sheer delight of his mastery. That, at least, is what happens to me when I listen.

His Violin Concerto, The Red Violin, is a case in point. This is the concert-concerto re-composition of the soundtrack Corigliano wrote for the rather wonderful movie of the same name. It follows the fate of a most singular violin and its owners over a period of several hundred years. Given the period of time represented it is only natural that Corigliano's music has a looking-backwards-over-time quality, a feeling of time lost (Proustian?) but regained in the telling of the story. This is modern music that is musically expressive first and modern only in its secondary sense.

The main, and most formidable movement of the work is in the form of a chaconne, a series of chords that center the music and provide a framework to the unforgettably evocative melodizing. It's all in the form of a bravura violin concerto that recapitulates the tradition from Mozart to Berg (in fact Berg's concerto has a certain resonance with Corigliano's) without sounding as if it were derived from any particular moment in that history. In short Corigliano's exceptional, naturally fecund compositional brilliance and his complete internalization of the grand tradition leads to music that transmits a great beauty, mystery and passion, complete within itself. There are references, but it is not assuredly a work of citations and footnotes. It is organic completeness. . . marvelous Corigliano music.

There is a new version just out with Michael Ludwig taking on the solo part and JoAnn Falletta conducting the Buffalo Philharmonic (Naxos 8.559671). It is hard to top the original version with Joshua Bell. But this version does quite well for itself. Ludwig gives a finely detailed rendering of the solo part without forgetting the romantic passion so much a part of the piece. Falletta and the Buffalo Philharmonic bring out the sensuous and mysterious sides of the work in fine fashion. The performance has its own coherence and validity. My take would be to get this version AND the one with Joshua Bell. If you are on a budget, this one at Naxos prices will serve you quite well.

It has as a nice bonus the Phantasmagoria Suite from Corigliano's quite successful opera "The Ghosts of Versailles." In essence this suite has a kind of fascinating pastiche quality, with quotations from classic opera, snatches of Rossini, Mozart and Wagner incorporated into a masterful orchestral tour de force that reflects the opera in a kind of instrumental microcosm. It is very enjoyable and very much an inimitable product of Corigliano's eloquent pen.

Corigliano's music impresses without the appearance of an intense striving for novelty. It appeals to those that may not like modern music, and too those that do. That's quite an achievement. This recording is a great place to experience his extraordinarily attractive music.
Posted by Grego Applegate Edwards at 4:47 AM