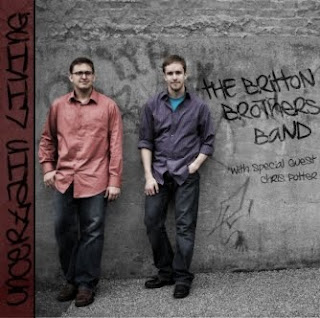 In the modern mainstream of jazz, nuance is everything. It makes the difference between an outstanding date and a "stuck groove." Cut for cut, the two hypothetical sessions may match in terms of instrumentation, stylistic subgenres explored and overall thrust. The first may find its way onto jazz radio for various musical and extra-musical reasons, yet the musical engine is idling, wasting precious musical gas. The other session will also (one hopes) be heard at large, yet has those elements that distinguish the music, revitalize it and give an individual touch to the whole endeavor. The first session will be forgotten quickly, in a just world; the second, one hopes, not. The Britton Brothers Band and their new CD Uncertain Living (Record Craft, no catalog number listed) belong to the second category

They play a range of styles from jazz-rock to bop, but it is not in some generic sense. The songs have substance and those extra arranged and composed touches that stand out. John and Ben Britton write most of the music and it's worth one's attention. John plays a very nice trumpet with a touch of universality. He's good though. There are roots of the best of the hard boppers in his playing, but not the licks they might have played. Ben is on tenor, and has that drivingly linear modern sound, evocative slightly of Mike Brecker, Dave Liebman and other such players. He has a very strong tone and a confidence and inventive ability in the improvisations that make you want to check him out in a live setting. The backing trio is strong, especially pianist Jeremy Strickland. The formidable Chris Potter joins the fray on two cuts for a vigorous two-tenor matchup.

This is a date one feels proud to file away under "good modern mainstreamers" and return to with pleasure. In this current world of musical overproduction, the Britton Brothers belong among the few who would have been, or should have been recorded in the earlier days when it took the backing of a dedicated boutique jazz label or even a major. That is not to say that this music could have been made in 1972. It's of today, regardless of its rootedness. I hope we hear much more from this talented musical family!
Posted by Grego Applegate Edwards at 5:13 AM