David Borgo: The Fine Art of Conceptualizing and Performing 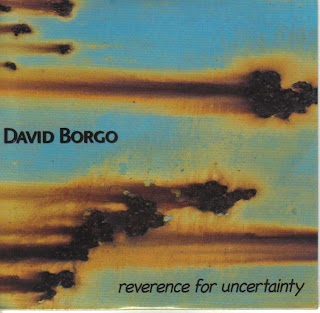 When I had the good fortune to review David Borgo's African inspired ensemble suite Ubuntu (Cadence 1181) I was so taken by it that I choose it as one of the top ten releases for that year. Never being one to let that all be, I searched out and found a few more albums by Dr. Borgo.

One of them we consider today, Reverence for Uncertainty (Circumvention 042). It turns out to be a wide-ranging, free to African-inspired outing with an ever-shifting lineup of musically sympathetic colleagues. David Borgo mostly is found playing his tenor, but also the alto and soprano, and a solo for chalumeau clarinet.

David has advanced degrees in ethnomusicology (good for that!) and teaches at the University of California San Diego. I suppose that helps explain some of his more African-inspired music, but on this CD there is a wider range of stylistic explorations: free improvisations, more or less formally written works, Ornettish anthems, and a little of Afro-groove-meets-avant-jazz, in a small group context.

Solos, duos, two and three horn pieces and three- to five-piece conventional combos alternate throughout the recording and keep the ear stimulated with the adventure of sound and the sound of adventure.

Dr. Borgo plays his saxes adeptly and with convincing avant fervor and polish, but he also thrives as conceptualist-composer. Reverence for Uncertainty provides the advanced improvisation aficionado with a sparkling gem of an offering. I recommend it highly.
Posted by Grego Applegate Edwards at 4:43 AM