Joe Chambers Still Kicks It On "Horace to Max" 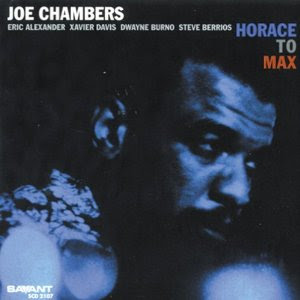 Drummer, vibraphonist, composer and leader Joe Chambers still has it! When I was pretty young and just getting into the modern jazz scene, I started grabbing up the mid-sixties Blue Note recordings, many of which turned out to be masterpieces. There were fabulous records by Dolphy, McLean, Hancock, Shorter, Moncur, Hill, Hubbard, and others. They took the basic hard bop ideas and spaced them out in that period, with wonderful results.

Now the drummers used on these dates were drawn from a small pool of players. Billy Higgins, who could fit in any manner of sessions, was often on a date; Tony Williams did his fair share of dates, and wow, what results. Then there was Joe Chambers. He was on many of the records. At first, before I listened, I thought, "too bad, it's some guy named Joe Chambers," not Tony or Billy. But then I started checking out what Joe Chambers was doing. His time was superb. He kicked the band in a loose but very driving way. He had impeccable dynamics and made the drum set SOUND.

Later on I heard him as an important member of the percussion ensemble M'Boom. I initially came for Max Roach, but Joe Chambers contributed some great compositions and played terrific mallets too. From there I heard his first albums on his own, and again was totally gassed.

Max is gone. Tony is gone. Billy is gone. Joe Chambers is not only not gone, his new album Horace to Max (Savant 2107) shows he is completely HERE! His drumming is as good as ever, maybe even more nuanced. His vibes-marimba playing is great, and he's gathered a group of sideman perfect for what he is doing.

Horace to Max, as the title implies, looks back and pays tribute to some of the masters of hard-bop-and-beyond. The choice of material is excellent, with numbers that really should be heard again--and so they are. Kenny Durham's "Asiatic Rays," Horace Silver's "Ecaroh," Max's "Man from South Africa," Shorter's "Water Babies," Monk's "Evidence" and a very nice nice rendition of Joe Chambers' own "Afreeka," among other things. Arrangements are deftly put together by Joe and they work well. The band shines. Eric Alexander's tenor has just the eloquence and fire needed to get things on a good footing, Steve Berrios is just the man to do the percussion-conga-lering and plays nice drums when Joe switches to mallets. Xavier Davis (and Helen Sung on one cut) play in the idiom with good drive and swing. They are joined by vocalist Nicole Guiland on two cuts and she fills Abbey Lincoln's shoes on "Mendacity" in ways that are certainly not slavishly imitative.

And Joe Chambers the drummer--any aspiring trapsetist monk ought to study what he is doing on this record. Listen carefully to the pulse and the SOUND. It's that of a master.

I can't say enough good things about Joe Chambers and this album. May he continue to thrive. Check it out.
Posted by Grego Applegate Edwards at 4:46 AM