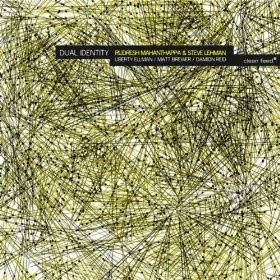 Masters of the saxophonic arts. That would certainly be an apt description of Rudresh Mahanthappa and Steve Lehman. Both have established a buzz among the jazz community as players to hear. With their Dual Identity (Clean Feed 172) CD, they are in a breakout mode. I'll start right off by saying that this is an album one should not miss. The twin altos of Rudresh and Steve stylistically and aurally mesh in the best sort of way. They both run long and exciting modern lines; together they have a kinetic interaction that puts the whole sheebang onto a very high plane. Whether it's matching solo for solo, simultaneously improvising, or working through the serpentine written passages, they shine and blaze like twin suns.

Their bandmates are not slouching either. Guitarist Liberty Ellman fuzes sophisticated post-William's-Lifetime comping and solo distinctiveness worthy of the best of the modern electricians out there. The rhythm team of Matt Brewer and Damion Reid (bass and drums, repectively) take the straight-eight form of a post-rock-funk approach and make something driving, complex and catalytic. Think of them as musical catalytic converters if you like.

This music is NOT polite (which is one of the first prerequisites for the modern jazz scene in my head), NOT cool ('though there isn't anything wrong with cool, either) and NOT pandering in any way to those who look for a smooth ride. This is on-the-edge music, not exactly as much free as post-post-bop ultramodern. All the fire of the medium is brought into play, but harnessed to the interest of creating a self-contained, renewed sense of form.

The sound of the dual altos is cutting and brittle. The note-ing is worthy of the best of the "new" players. That's because they are. Among the best, that is. This is the biggest thing since sliced bread. Bigger because once consumed, it can be consumed again with even more pleasure. Mahanthappa & Lehman get my BIG WOW and a vote for one of the best of the year! But I don't really like the CD, NOT! It rejuvenates the scene for me. What more to say?
Posted by Grego Applegate Edwards at 4:16 AM