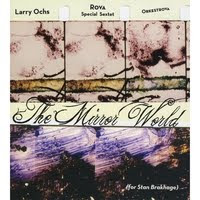 The downloading world can be a great convenience, but it has its problems. One is that the legit downloading services take no note of the "peculiarities" of serious jazz, improv and classical fanatics like me (and probably you, if you are reading this). That is, they assume that all you really want is a list of song titles, the artist and the album title and that's about it. So when I downloaded Larry Ochs/Rova Sextet's recording The Mirror World (Metalanguage 2007), I got the music in a more or less acceptable grade of MP3 sound, and little else. The music is dedicated to film auteur Stan Brackhage, that it mentioned. Otherwise, I was on my own. Pop and rock listeners generally, so it is assumed, don't care about anything but finding the tunes they want. Well I'm not sure that is always true, either. But at any rate the idea that information will be ignored by the consumer and will distract him or her from the all-important INSTANT PURCHASE is not only insulting to our intelligence, but assumes that people like me, who write about music, are really not useful. (Ahem, I refer to the fast disappearing art of writing liner notes, which I would be happy to do. It would be a great thing to actually bring in some money for peanut butter sandwiches, which are a good staple along with beans when you basically have no money. OK?)

So when I decided after listening several times that The Mirror World was quite interesting and good to review, I had to go back to the net and try to get a little more info. You who have an actual hard copy of this 2-CD set may have the extra info I didn't find on the net, but bear with me because it is the music itself that gets my attention here. Fill in the extra-musical details as you will.

So Larry Ochs and his fellow members of the Rova Saxophone Quartet added two drummer-percussionists and realized Mr. Ochs' extended piece for this recording. That was and is a great idea because. . . 1. Rova sounds even more exciting when a couple of drummers are there bashing away. 2. Ochs' piece is ambitious, extended and very worth the listen. There are worked out passages of a brittle complexity, group improvisations of great strength, lucid, torrid solos in a free-form mode and there's a good bit of the above. Though the piece runs at about 70 minutes and could have easily fitted onto a single CD, the breaking of the piece into two digestible segments keeps the listener focused. It's not such a bad thing.

I wonder what the fate of Ascension would have been had CD technology been around when it was first released. An 80-minute version would be great to hear now, but back then I don't think the intensity and newness of free larger group excursions would have made many people comfortable with so much of it at one sitting.

So beyond my long asides, for which I apologise, I want to express to you my feeling that The Mirror World is one of those recordings that is destined to grow in stature as time passes. It is intense, but really quite beautiful, quite an achievement. Get it and you may feel the same way after a number of plays.
Posted by Grego Applegate Edwards at 5:09 AM