Canadian Brass Get Out the Big Guns for Independence Day 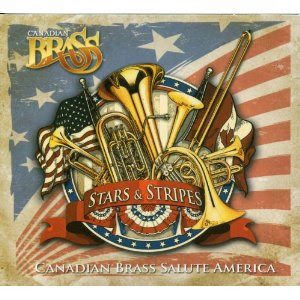 If you are the sort of music lover that needs to have various musics to mark various occasions, then, in the States anyway, July 4th and Thanksgiving may send you on a longer and more complicated search for appropriate sounds, compared to some of the other holidays. Neither holiday has a long tradition of record merchandising to appeal to those who need musical ritual to heighten the day's festivities. Ives' Holidays Symphony actually covers both and a few others to boot, but we already talked about one excellent recording of that last November.

If you have taste and something quite a bit more developed than the tin ear sort of music appreciation, the music should be appropriate but also have a little substance. In other words, Kate Smith singing "God Bless America" won't do. Now pardon me, but in the aftermath of 9-11, I personally have heard enough versions of "God Bless America" to last me several lifetimes. The New York Yankees played that god awful 78 of Kate Smith for EVERY seventh-inning stretch in Yankee Stadium for how many years? Much too many. It's just a terrible song in my opinion. It has a mawkish sentimentality that was appropriate during the WW II years but only seems forced today. "Stand beside her and guide her in the night with the light from above" must be one of the most inane lyrics ever produced. Who is she, first of all? And is that the moon the song is referring to? Anything to get some rhymes going, I suppose.

So when I look for stirring, appropriate music for July 4th, I surely hope that GBA is left out. The Canadian Brass and their album Stars and Stripes (Opening Day 7382) do NOT cover GBA, so immediately I like the thrust. It's their exceptional brass ensemble teamed with a crack drum outfit that goes for the old rudimentary Colonial-to-Civil-War instruments and styles. That works. That works quite well.

Now I can't help but wonder how a selection of songs for brass and drums to mark Independence Day has changed since Charles Ives' dad marched down Main Street more than 100 years ago. One swallow does not make a summer, and so too the Canadian Brass's choice of repertoire does not constitute a scientific plumb line for every concert and band's play list today. Nonetheless it's fun to notice what might be different in 2010 comapared with 1910. Much of the selections perhaps are identical to those heard in a bandshell concert in the park 100 years ago. There are the potboilers like Sousa's "Stars and Stripes," "Hail Columbia" "The Battle Hymn of the Republic" and those sorts of things. But "Shanandoah" is not something typically included in ye olden times, if I am not mistaken. "O Canada" is part of the disk because after all this is the CANADIAN Brass, and I happen to think it's one of the nicest anthems going, so who's complaining?

"Dixie's Land" may or may not have been included years ago. It depended on where the concert was being performed of course. And of course a quotation from Copland's "Fanfare for the Common Man" is only possible now, since it did not exist then. Well, all that is interesting but it's the album that must stand or die on its own. I am happy to say that this one has plenty of good factors going for it. First of all, the Canadian Brass are a great outfit and they sounds as good as ever here, as do the drums. The recording has nice presence. The arrangements have just enough subtlety to keep the more musical ears occupied, while there are also plain old moments of bombast to get grandma going.

Anyway I was a little surprised to find myself really liking this CD. It's good! This taps on a musical tradition in ways that keep it vibrant and living. And it's something anyone with musically attuned ears will not cringe to hear. It may well delight your guests. It will likely delight you as well.
Posted by Grego Applegate Edwards at 4:20 AM