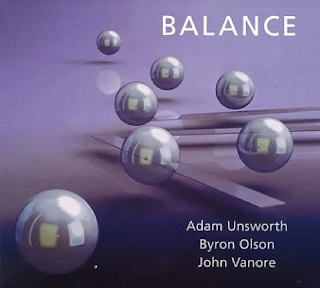 Music of a jazz sort for orchestra is not common, mostly these days for economic reasons. It takes funds, and they aren't always available. Often enough in the past, following pop models, the presence of strings as a "sweetener" was the rule of thumb when they were included, especially in the case of singers.

There have been masterful recordings for soloists and orchestra of course, especially from the later '50s on. Ornette Coleman's Skies of America comes to mind, along with several works by Gunther Schuller. Roscoe Mitchell and Anthony Davis are a few others off the top of my head who have done some excellent work.

But it remains uncommon. So when French horn master Adam Unsworth, trumpet-flugelman John Vanore and composer-arranger Byron Olson get together and do a chamber orchestral jazz album, Balance (Acoustical Concepts 48), and it comes out very well, one takes notice.

What we have here is a full program of Olson and Unsworth originals, arranged and orchestrated by Olson (except one by Unsworth). The solo clout of Vanore and Unsworth are out front throughout and they sound quite good indeed. A sextet forms the core of the music--Unsworth, Vanore, plus Bob Mattach on tenor, Bill Mays on piano, Mike Richmond on bass and Danny Gottlieb on drums.They function as the jazz ensemble per se, with rhythm functions, small ensemble functions and soloing--Mays and Mattach and the rhythm get their turns and sound well.

There are two sessions involved, one with a more-or-less full complement of seven string players and then three reeds; the second involving five strings, four reeds and vibes. The sextet is a constant.

What's critical of course is the quality of it all. It's boppish and post-boppish contemporary music, well written, well orchestrated and well played. There is consistently interesting part-writing happening throughout, sometimes contrapuntal, always nicely give-and-take. The mini-orchestra at no time sounds tacked on, but rather is fully integrated throughout, with the sextet sometimes functioning as the soloists in a series of mini-concertos, the orchestra responding to and blending with the small group in concerted form, in various very musical ways. On the other hand there are times when the entire group functions like a big band voiced in sections and/or melding together in complexes/clusters of tone color.

It's high caliber music that bears hearing no matter what your stylistic persuasions may be. Give this one your ears and you will be rewarded!