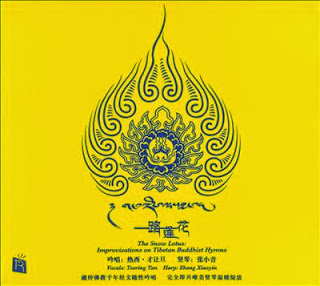 Those who know the music of Tibet, especially if they grew up imbibing the Nonesuch Explorer Series when it was in full flourish, may mostly know Tibetan Buddhist chant with its basso overtone singing, long trumpets and cymbal-meshing interludes.

Yet of course there is more. Tibetan Buddhist hymns, for example, are more conventionally melodic, more within the realm of song form, and can be quite beautiful and expressive in their own special way.

Examples of those have been available to westerners for years on Folkways Records, among others. But to my surprise there is a new album out that takes some of the hymns and rearranges them for vocals, harp, cello and flute. New age? No, not really, because these arrangements do justice to the originals but contemporize them with western instruments faithful to the tonality of the songs and their peaceful outlook.

The Snow Lotus: Improvisations on Tibetan Buddhist Hymns (RMCD-1052) is the result. As Joshua Cheek puts it in his very poetic liner notes, this is not just music that has beauty; it is about beauty. The songs are haunting, sung with feeling by Tsering Tan. Zhang Xiaoyin has a central role to play on harp. She is excellent. But the cello, flute and vibes players have much to add as well, when called upon to do so.

In Joshua's words the songs are, in the tradition, "strong, but not fierce; yielding, but not formless; pure, but not sterile; soothing, but not spiritless, and hearing them can help purify the hearts of listeners." Well-said and, if you give this music a chance, true.

I probably should resist the wordiness of a continuation. This music does what words alone do not--it conveys the concrete magic of considered tone. And sometimes that is exactly what you need.

Posted by Grego Applegate Edwards at 4:24 AM