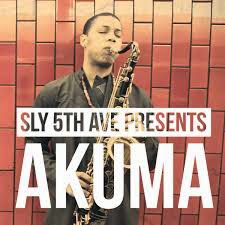 Sly 5th Ave (aka Sylvester Uzoma Onyejiaka II) makes his debut with Akuma (TRR-014). Still in his early 20s, Sly plays sax (tenor mostly) and writes/arranges a series of pieces for a full ensemble--a sextet augmented at times by additional winds, piano-organ, guitar, violin and voice. The music as Bob Belden in Sly's liners points out represents jazz out of the African diaspora. Sly presents an attractive Afro-jazz blend that does strongly resonate with some of the very promising sounds of jazz that were happening from the time of Coltrane's death through to the mid-'70s.

What that means is you get a mostly straight-eight percussive togetherness overlayed by well-composed horn and rhythm lines. It has affinities to late Lee Morgan, early-to-mid Elvin Jones, Pharoah Sanders, Herbie Hancock's Mwandishi, mid-period McCoy Tyner, and perhaps even a little Norman Connors.

But that doesn't mean it mimics these artists and their bands as much it draws strength from that tradition. Sly on tenor and Jay Jennings, trumpet, have strong solo presences, among others. The rhythm section of Ross Pederson, drums, Daniel Foose, acoustic bass, Keita Ogawa, percussion, and Cory Henry, keys, gets strong foundational grooves going and locks in.

The compositions have tensile strength and power. It's great to hear a band play in this zone, for there is still much potential to be had from this style of playing. Sly is already making a very good contribution with this music.

It's an album that impresses, an auspicious debut from a very promising tenor-composer-bandleader.