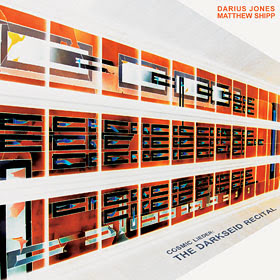 You take two players of real breadth, stature, improvisational genious maybe, and you put them together. What will be the result? Sometimes you can't be sure the two will mesh. That's not the case today. Take the rolling-and-tumbling all-over-the-piano ballet of Matthew Shipp and put him with and against the starkly purposive alto of Darius Jones. You get Cosmic Lieder: The Darkseid Recital (AUM Fidelity 088).

It's from a couple of different live get-togethers recorded between 2011-13. It amazes, if I might suggest, with its bold give-and-take. This is free improvisation of the best sort. When Matt asserts a way through the open field, Darius counters with his own way, and both work together beautifully. Now that would be great whatever the content, pretty much, but what excites is the wealth of invention involved. Structure gets into the picture, the structure of the moment, but not just any moment. It's moment-ful as it is event-ful. There are spontaneous musical events that occur one after the other and each is in its own way a surprise, and each in every given segment works with the segments before and after to form a complete statement.

Now maybe that's easy to say but it's true of the music here throughout. You listen closely, you hear how it all works together and you revel in it. The best free music has something to say and, if everything is right, says it with consistency, with excitement, with an inner presence. That's what this set does.

Matthew Shipp is an institution among avant-free pianists today. He's paid the dues and he's surmounted the obstacles to forge a playing style that belongs to himself alone and he comes through, here as elsewhere, as one of THE CREATORS. Darius Jones may not be as well-known. But he too has that something here, that one-to-one thought-to-execution lucidity. His soulful abrasiveness and intensive line creativity complements what Shipp is doing excellently.

So that is what I feel after a good number of listens. If somebody wanted to know what is going on in the free-avant sectors right now, I would recommend she/he listen to this, among some select others, to get it. That's how strong I think this set is. Strength. It's here.

Oh, this release has an official street date of August 12th. But you can order it now direct from AUM, and/or you can pre-order a download version from i-tunes.