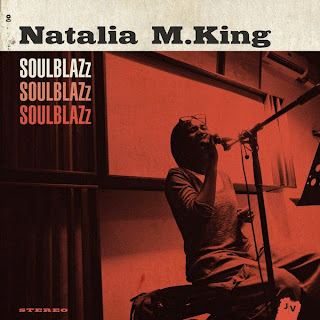 After many years dealing with downloads, I must pause and say something straight out. For a reviewer they are a nightmare. Unless you already know or don't care much about what you are hearing (as a reviewer the latter is never the case, the former ill-advised as an attitude) they are a computer-jamming array of PDFs, jpegs, web pages, and an extensive labor trying to keep track of where to put what and where you get them when it comes time to refer to them. OK, I've said it.

Now to Natalia M. King, singer extraordinaire who was born in Brooklyn and found herself in Paris years later launching a career. Her latest puts her in a mode that works quite well for her, with a small, talented, soulful band doing various song standards, jazz standards and some not-so-standards (I mean her interesting originals) that bring out the soul and blues in the jazz realm, or, alternately, the jazziness that exists potentially inside the soul blues. Both, really.

The album is Soulblazz (Jazz Village 570031) and it has that certain something that would not exist without Natalia M. King's way with these songs. She has soul, she has the bluesy delivery, but then again she does not sound like what you might expect from that. She has her own way and it reminds me of various singers, mostly long gone, but nothing direct.

She has a voice that pleases without rehearsing the ways of her forebears. And that makes her rather special. I expect she will develop further as she goes along her path. For now she has carved her own niche. Listen!