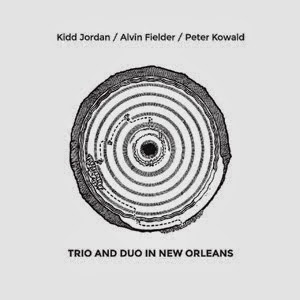 Three masters of improvised freedom gathered together for the first and only time--in New Orleans, April, 2002. The results form the first half of the 2-CD set Trio and Duo in New Orleans (No Business NBCD 64-65). Kidd Jordon on tenor, Alvin Fielder, drums, and the late Peter Kowald, bass--that's the lineup. And make beautiful music together they did. Mindful of both the past tradition of their art and the potential on the horizon, the free and clear way ahead, they perform as you might hope they would, open to the opportunity to express a significant three-way dialog.

Kidd and Alvin are no strangers to one another as co-members of the Improvisation Arts Ensemble in the '70s, but the time intervening has given them a maturity and even closer rapport without losing the fire and spontaneity of youth. Peter rises with them to the occasion for a marvelous set.

Three years later Fielder and Jordan recorded again, this time as a duet. The resultant set is in every way as good as the trio outing, perhaps even more urgently fired-up.

We all would do well to study these disks, for they contain a summing up statement of where they were at that point in time. For Peter near the end point of his journey, a salute to the excitement of being there with Jordan and Fielder, for the other two a new affirmation of the expressive power the music holds for us.

Posted by Grego Applegate Edwards at 6:18 AM