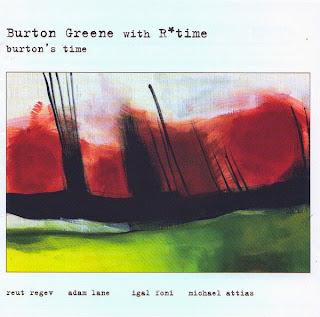 Burton Greene, avant improv icon, pianist, composer, creative force, is not one to pin down. At least, not for long. His lengthy career has been variously documented by some mostly excellent recordings. His movement from station-to-station in his creative life can be fairly well mapped-out by listening to the sequence of albums.

But what matters right now is a recent release out on CIMP (400) of Burton and a Quartet-Quintet, recorded in the States in 2011, namely Burton Greene with R*time, Burton's Time.

It is a Burton Greene increasingly occupied with, and singularly original in the composition zone. There are four Greene pieces, four more co-written with Silke Rollig, and one by Silke. They have angular memorability, have a post-Mingus-like arc to their melodic-harmonic unfolding (as Bob Rusch suggests in the liners), but nevertheless occupy their own special place.

The compositions are freely and imaginatively realized by a seasoned and nicely blended ensemble that includes of course Burton on piano, Reut Regev on trombone, Adam Lane on bass, and Igal Foni on drums. Michael Attias on alto makes it a quintet for the last half of the program.

These are excellent players all, perhaps the biggest surprise in Reut Regev, who is a trombonist with a definite original presence. I have not heard her previously and she impresses me as a player.

The emphasis throughout is on the compositions and how to play them freely while leaving room within the interstices for improvisational sequences. That happens consistently and effectively.

Burton's Time is an album that stays in the mind after hearing. It is new jazz that moves forward with Burton's special sense of form and structure-- free, yes, but also rigorous and memorable from a melodic-structural point of view.

It is an achievement, certainly one of Burton's best in the last decade. I do recommend it strongly.