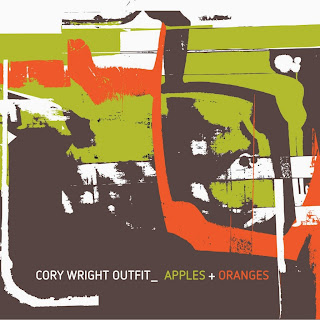 Cory Wright has conquered musical space. It's incontrovertable, as the old Castro Convertible ad jingle used to have it (if anybody remembers that). He's done it especially with his album Apples + Oranges (SingleSpeed Music 012).

What we have on this set is a freely propulsive outing by the Cory Wright Outfit, which has Cory on tenor sax and b-flat clarinet, Evan Francis on alto sax and flute. Rob Ewing on trombone, Lisa Mezzacappa on contrabass and Jordan Glenn, drums.

This is freebop at times, other times free new music that swings brightly, a collective froth well-structured and well-played by all involved. Cory writes some excellent charts here and the band comes through with fire and individual sounds that blend wonderfully well.

It has the tang of modern harmony, the afterbop glow and personal expression of a Dolphy or Mingus of today. That does not mean that anyone as a soloist has reached that plane, and after all how many today could you say that of? But they are very much playing every note right and with feeling, and the compositions give you a great deal to appreciate.

It's a kicker with an iconoclastic razz to the complacent and staid. It is the opposite of a safe and middle-of-the-road old man version of jazz. We need that opposite, that friction against the obvious more than ever if the music is to stay healthy and relevant.

This one is as healthy and relevant as anything today. It's freely outside but composed and performed with a real flair.

I wish this outfit much success. More from them would do just fine with me.

Definitely important music. I recommended you hear it!