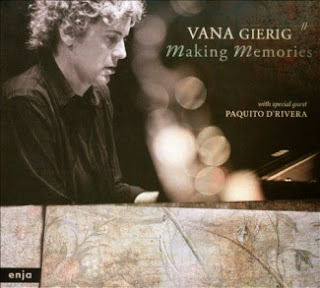 Vana Gierig has a way with the piano--rhapsodic, rhythmically vital and as accomplished in his touch as he is in vertical-horizontal note choice. He can get a real froth going when he sees fit, but it's only part of what he is after as an artist-player-composer. His album Making Memories (Enja 9597-2) gives us beautiful evidence of this. Nicely swinging, Latin charged, sometimes classically influenced music is the order of the day with compositions of originality and flair, playing of real note from Vana, and an assortment of sidemen who tune in fully to the Gierig sound.

Stalwart Paquito d'Rivera plays clarinet for half the album and sounds every bit as good as ever, though oft'times as much a timbral color as an improvised voice. The acoustic bass chair is adeptly shared by Sean Conly and Matthew Parrish; drums are well represented by Marcello Pellitteri, with Gene Jackson substituting on one track; percussion gets its due with Vinicius Barros; and three tracks add violin and cello.

Nevertheless there is a piano trio plus percussion nucleus that makes the bulk of the sound what it is, with d'Riviera adding another inimitable voice.

The songs and arrangements stand out in an evolved way, the Latin element seeming natural and unforced as the main groove element but in conjunction with the very musical pianism of Gierig.

No notes are superfluous. Everything counts and does so with smarts. And the music is sophisticated enough that "mainstream" disappears in the sense of cliched returns and instead makes way for tonal eloquence.