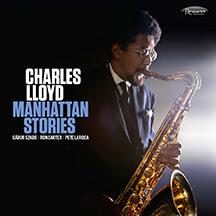 Charles Lloyd hit the jazz world like a kind of meteor in the mid-to-later '60s. His classic quartet of a young Keith Jarrett, an equally young Jack DeJohnette, and Cecil McBee, then Ron McClure, had much going for it. There was a kinetic magnetism in that group that appealed to many in both new jazz and rock communities, for good reason. But of course Lloyd did not appear out of nowhere. He first came to some notoriety as music director for Chico Hamilton's group, then signed to Columbia for several albums with quartets that included Richard Davis, Ron Carter, Tony Williams and Gabor Szabo. The signing to Atlantic and the formation of the classic quartet gave him a boost into the limelight that the previous work made possible.

A new two-CD disk of two 1965 performances with the earlier quartet (at Judson Hall and Slugs) has emerged. Manhattan Stories (Resonance 2016) is the name of the set. It gives us a great sounding, detailed look at the earlier incarnation in excellent form. On drums was Pete LaRoca Sims (instead of Tony Williams), Ron Carter on bass and Gabor Szabo on electric guitar.

It is prime Lloyd. Gabor Szabo on guitar makes for a very different ambiance to the sound of the group. He chords a good bit and does a sort of raga-ish modality that opens things up differently than the group with Jarrett. It is more sparse and the rhythm section of Carter and LaRoca subsequently is quite prominent.

They do a few numbers ("Sweet Georgia Bright" and "Dream Weaver") that remained in the repertoire of the later quartet, and they do some other things as well, such as Szabo's "Lady Gabor."

Lloyd sounds great on tenor and flute, Gabor brings in his special approach, and Ron Carter and Pete LaRoca remind us how good they were then.

It's a beautiful revelation of Lloyd taking off. The quartet has real presence. Excellent discovery! Hear it.