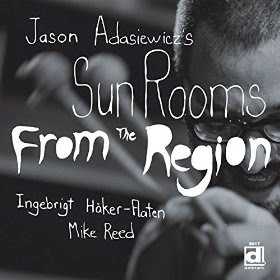 There's a new recording of him with his Sun Rooms trio, From the Region (Delmark 5017), and it breaks new ground. Nate McBride moved from Chicago so he has been replaced by bassist Ingebrigt Haker-Flaten, who fits in wonderfully well. Mike Reed still gets things going from the drum chair (or throne, as it is called). And Jason prevails on vibes.

This is an album of Jason's compositions and they are good, edgy, rhythmically alive. There are worked out routines for the three and there is much swinging in an advanced, free sort of context.

If you appreciate the free-period of Hutcherson, Walt Dickerson and such then Jason's work will resonate with that for you. He has established his own turf but there is a kind of avant tradition in there, too.

As Adasiewicz says in the liners, everybody is a drummer in this band, meaning that the percussive and rhythmic momentum is very much a factor in this music. It moves you forward. Haker-Flaten and Reed do much more than accompany. Jason is very out front as you would expect but all three interlock in classic free-swinging ways.

This is a vibes album of genuine importance! It's very together and gets better every time you hear it. Do not hesitate!