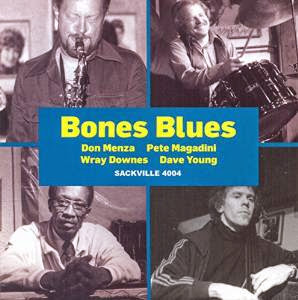 When I was seriously woodshedding in my early years, Pete Magadini published a two-volume guide to polyrhythms that remains a work all serious musicians should tackle. The mathematical breakdowns of ratio-ed note groupings quickly become literally mind blowing. It certainly did that for me. Only a little bit later did I discover that Pete was an active drummer up in Canada. Eventually I came across his quartet album Bones Blues (Sackville 4004) which is once again available as part of Delmark's Sackville reissue-redistribution program.

It is the same trio that backed Buddy Tate on his Sackville album Texas Tenor which I covered a short time ago (see posting content index on the left-hand column). That is Pete of course on drums, Wray Downes on piano and Dave Young on bass. To this potent triumvirate is added Don Menza on tenor.

This is an album of cohesive and rewarding straight-ahead hard- and post-bop jazz classics with a few originals and plenty of committed playing. Three numbers are associated with Miles, namely "Old Devil Moon," "Solar" and "Freddie the Freeloader." Then "Poor Butterfly" and Golson's perennial "I Remember Clifford" get good treatments too.

No, Pete does not bring in all the brain-twisting polyrhythms in either his playing here or in the band's arrangements. It's not that sort of session! But his drumming is exemplary. Pianist Wray Downes has some real bop-chops and shows us them in no small way. Don Menza is a genuine swinger with a sort of post-Zoot acuity and soul. Dave Young gets it all right in the bass chair.

Now back in 1977 this kind of date was not unusual. With the right players, the fire was there and it sounded "authentic." These many years later it still does. The trick is that to play "trad" is not to emasculate it. If you do that you give "polite society" something inoffensive, but then the music is not what it is meant to be. So I can heartily say this sounds as good as ever, that there is nothing polite about it and it fans the fires when the players feel it.

If you take joy in old school jazz as developed in the '50s and '60s this will get you smiling.