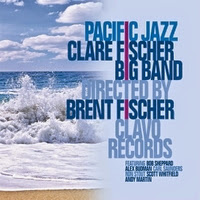 Composer-pianist Clare Fischer may no longer be with us; his music remains. His big band in the last years remained active, under the direction of his son Brent, and the sessions comprising Clare's arrangements, compositions, and keyboard playing, along with some of Brent's own compositions and arrangements, are now with us on the album Pacific Jazz (Clavo 201408).

It is a combination of straight-ahead modern big band jazz with quirky modern twists and turns, as one might expect from Clare. There are unusual arrangements of standards like "Cherokee," "Cotton Tail," "Eleanor Rigby" and such, plus originals by Clare. Then there are Brent's own pieces (3) and arrangements or co-arrangements with Clare.

The band is first-rate with Bob Sheppard and Gary Foster on hand along with a host of interlocking combinations of crack West Coasters. The band shows a full and bright sound throughout and that in part because of the quality of the arrangements as well as the discipline and talent of the musicians.

I found myself coming under the spell of the disk gradually. By now I feel at home listening. There is much to hear and some of it is exceptional. The rest is very good. There is enough different about the arrangements and pieces that you do not feel like you are hearing rehashed big band. There is, to pardon my turn of phrase, new hashing going on. Even Brent Fischer's funk rock "New Thing" gives life to something that can get pretty tired when formula holds sway.

After all that was always part of what made and makes Clare Fischer's music sound good, today as yesterday. He always found a way to make it new. And so here.