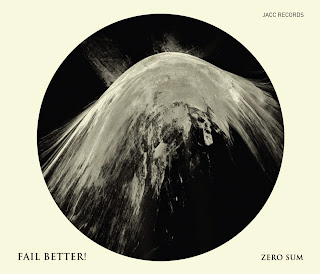 For the new year we have first up some open-form free jazz from Portugal. The group is Fail Better! The album is Zero Sum (JACC Records 021). This an album that has so much about it that it takes several listens before you grasp it all.

The band is made up of Marcelo dos Reis on electric guitar, Joao Guimaraes on alto sax, Jose Miguel Pereira on double bass, Joao Pais Filipe on drums and Luis Vicente on trumpet. They create a potent, shifting blend with six pieces that run a sort of gamut of possibilities. "Bright Red," the opener, pivots around a fundamental key center for a sort of dirge. This segues to a plaintive unaccompanied solo sax soliloquy that gradually brings in percussion and bass and gives the trumpet some space, still all within a pedal-pointed center. It is sombre in cast, perhaps in keeping with the title "This is Our Gun." The alto rejoins the throng and then the guitar as momentum and intensity gradually increase. Dos Reis solos, then is joined by sax and trumpet for a three-way extemporization that has power. The music thins out a bit for guitar and horn statements that extend the key center. Dos Reis opens up the tonality for extra-tonal freedom and the horns join for the ensuing section which has interesting ebbs and flows of energy freedom and experimental landscaping.

With "Dysfunctional Wire" a gradual, free-arcing crescendo builds momentum, then dissolves into a brief respite before they are off again into an an energy foray underpinned by dos Reis worrying a rapid-fire series of notes as all blow off of that until they rather literally explode with force and fire, dos Reis wildly hitting quickly strummed distorted psychedelic chordings as Pereira manically bows harmonics and the rest surf atop in a heavy tumult. A held note of guitar feedback ends it and the last section gives us a coda of machine-like drum repetitions and quiet freedom. Dos Reis begins rocking over a repeated, building chordal barrage and everybody takes it into a sort of nirvana drone cataclysm.

This is a group effort, but dos Reis, Giumaraes and Vicente get a fair amount of front-line time which they use to good advantage. Each has grit and ideas a-plenty. The rhythm section makes an important contribution too, never flagging, articulate in their freedom. The continuous but sectional approach gives the entire performance a dynamic worthy of our ears. This sort of episodic structure reminds slightly of the Art Ensemble when they went free in the classic years. Yet there are distinctive personalities at work here so the similarities are more lineage than in-the-image. The gradual build throughout has the effect of taking the listener from a peaceful dirge to a manic insistence that rocks you off your seat.

It is a worthwhile foray that will leave you with a feeling of having been on a trip to nether regions of space. Bravo to that!