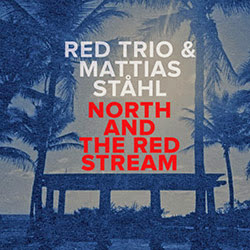 The world of free avant music, sometimes called "free jazz," continually evolves and permutes so that a simple classification of style sets doesn't always serve to clarify. Potentially every configuration of players occupies its own world, though of course that is never entirely true, since both the past and the present influence every soloist and ensemble in some way.

But nonetheless the idea that every moment of music-making is potentially open to any expression allows at least theoretically for anything to develop. The feeling of open creativity in spontaneity has been very present in the best senses with the Red Trio, a worthy gathering of pianist Rodrigo Pinheiro, contrabassist Hernani Faustino and drummer Gabriel Ferrandini. On their latest recorded outing they add vibist Mattias Stahl. With his presence there is a four-way dynamic that shows both continuity and change; his inclusion is a factor that gives the group dynamic another melodic-harmonic voice that brings a freshened set of spontaneous sounds to bear.

All this on the CD North and the Red Stream (No Business NBCD 69). It was recorded live at the VDU Jazz Festival Kaunas late in 2013. And no doubt the live gig gave them some additional inspiration because they are all locked into good things throughout.

Both the pianist and the vibist have in jazz and subsequent avant music been historically faced with dual poles of consideration. Both instruments, at least in their maturity, have the capability of creating self-sufficient harmonic-melodic worlds, yet of course in a group context and as influenced by the development of the music there has been the pull to create horn-like lines. Earl Hines was one of the more overt of the early exponents of the horn-style of soloing, but of course he never abandoned the two-handed harmonic pianism that came naturally to those who study the instrument. With the history of vibes playing it was later Red Norvo and of course Milt Jackson who did more to integrate that pianistic harmonic conception into the vibe approach. Since then both instruments variously gravitated between lining and harmonizing as the music evolved and changed.

I bring this up because Pinheiro and Stahl do a great job on this set travelling in and out from a harmonic to a lining approach. In a free context where there are implied key centers but lots of freedom of choice, the two players work especially well together in choosing lines and harmonic voicings. And by so doing you get a distinct kind of spontaneous fullness that Hernani on bass responds to rather brilliantly and Gabriel absorbs and in turn sets up various inventive pitched and unpitched washes of percussion.

And that is to say that the group sound as a four-fold voice is especially prominent and innovatively interesting on this set. That is not to say that there aren't solos here. But the solos are quite often integrated into four-way dialogue where everyone adds to the solo for a very creative ensemble sound.

These are four very talented creative souls and the freedom they espouse is extraordinarily well developed on this set. It is a set that sustains interest from start to finish. There are no tentative sounding harrumphs, no momentary fumblings for direction. They know what they are about and they go there, directly, and stay there.

And the vibes-piano tandem works especially well. That's because they, and really all four are listening--but complementing more so than simply responding to each other.

It's a very, very good outing that all interested in the free zone should hear.