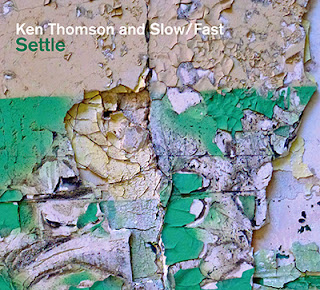 The music still called "jazz" by most out there continues on its way with new music that can startle or confirm, depending on where it is coming from. "Startle" is more the applicable word with Ken Thomson's Slow/Fast unit, especially with their release Settle (NCM East 40138).

Compositionally Ken on bass clarinet or alto often conjoins with Russ Johnson's trumpet for line weaving that contrasts with Nir Felder's electric guitar counterpoint or chordal frame, which in turn gets strong support or counter movement from the rhythm team of Adam Armstrong on bass and Fred Kennedy on drums. Or guitar and reeds team up and let trumpet and bass take alternate routes. The point is that Thomson has a vision of the various instrumental combinations for a particular piece and goes with his creative instincts. The compositions are what startle because they don't take for granted any standard operating procedures in writing for such an ensemble. Ken hears what others might not as possibilities and realizes them in his very own way

The heft of Nir Felder's guitar work puts the music often enough in a jazz-rock zone, but an outside-avant sort of version. All three front liners can and do solo well, but in the end it is a group sound that hits you.

Extremely well-done and different. Hear this one!