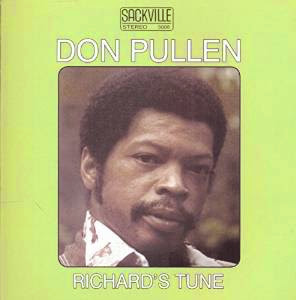 Don Pullen was a brilliant pianist who left us much too soon. In 1975, at the end of his several-year tenure with Charles Mingus, he recorded a solo album for Sackville records. It was reissued with extra cuts in the 1990s and from that time has taken as its title Richard's Tune (Sackville 3008). With the new Delmark distribution deal we have it very readily available again and we are all the better for it.

Of course Pullen came to national attention in the mid-'60s when he appeared as pianist for Giuseppe Logan's two ESP albums, then a little later in a duo recording with Milford Graves. These albums showcased his outside playing in brilliant fashion. He was a scatter stylist primarily, and though his playing was more like Cecil Taylor's than Paul Bley's, he nevertheless was his own person even then.

By the time Song for Richard was recorded he of course had gained a good deal more fame as a member of the Mingus entourage. And by that time he had established a sort of in-and-out duplex style that could stay within modern contemporary harmonic jazz realms or take it out into more uncharted zones, sometimes within the same solo.

And that is the Pullen we get on Richard's Tune, a seasoned, very personal stylistic brilliance that went in both directions. The compositions are strong, with outside fireworks running together with earthy gospel and well-considered changes-based numbers.

Like Jackie Byard, who prefigured him in the Mingus group, he had assimilated the history and the new thing from the ground up and could do it all in his own way. And both he and Byard did all of this in ways that unmistakably identified them as stylistic originals.

On Richard's Tune we get an hour of Pullen at his best. If there is no one Pullen album that sums him up, this one gives us a beautiful picture of what he was about in 1975. He had a rare ability to grasp the ins and outs of improvised music from multiple perspectives, each with its own special Pullen focus.

This is a central disk. You should get some of the earlier and later ones, too. If you start here you can't go wrong. And if you already dig Pullen, you need this one, certainly!