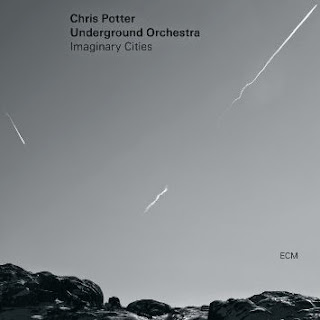 We've heard him grow and develop over the years into a monster tenorist, yes. Now we hear him take on a large-group project where composition and arranging are a bit more out front. The core of his Underground quartet is here in Craig Taborn, piano, Adam Rogers on guitar and Nate Smith on drums. Add to that two bass players in Scott Colley on contrabass and Fima Ephron on electric bass, Steve Nelson on mallets, and a string quartet.

The music is riveting in its compositional-arranged beauty. Strings are no afterthought but form an integral part of the music, which goes from balladry to jazz-rock to Arabic-Indian elements to new music Bartokian presence to large-group jazz per se. The Potter sax and bass clarinet artistry is central and pivotal and he sounds inspired.

Something like this can go its way with innovative groupings and still not quite succeed. Not so, this album. The group forces hold together organically thanks to the Potter arrangements and compositions, yet there still is much in the spontaneousness that keeps it fresh and jazz-worthy. And the sound of the recording is beautiful!

I'll admit the first hearing puzzled me slightly. I did not know what to expect and at first didn't get a feel for what was going on. That was completely dispelled by hearing #3. At this point I revel in the music. It may not be what you expect, exactly, but it is a major Potter opus, a remarkable achievement.

I hope he does some more of this sort of thing! It is a revelation in its own way.