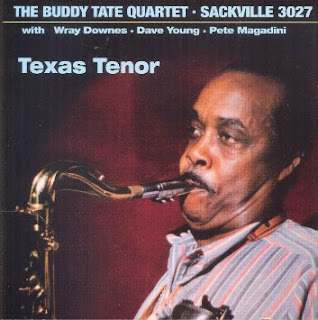 Buddy Tate came into the Basie band in 1939; Lester Young left Basie in 1940. Thereafter the harder, bluesier Tate held sway. His Texas roots and swinging presence was well-received and he went on of course to continue to blow some great horn in various configurations until his passing in 2001.

Sackville records got the good idea of recording him with a top Canadian rhythm section in 1978. Now that Sackville's back catalog is in the hands of Delmark we get to experience that session once again, with a couple of bonus extra cuts for good measure.

Texas Tenor (Sackville 3027) is one of many Tate small group records he made over the years. But it remains one of the best. It is near-definitive later Tate, with a touch of bop now in his playing, but with that patented hard-driving rooted sound as strong as ever.

The backing players are there with him, driving the music to very swinging heights. Pete Magadini is nuanced but direct on drums, bassist Dave Young gets the foundations moving and pianist Wray Downes deftly combines bop, swing and blues feelings that complement Tate's effusions completely yet are worth hearing in themselves.

Buddy holds forth on tenor for seven tunes, and spells himself with his own hip clarinet for two more. Chestnut standards are pretty much the order of the day. Tate sees to it that they launch the music into Tate territory with a flourish. We hear him not just swinging hard, but also in his own ballad lushness, as in "Alone Together." That's great.

It's a joy to hear Buddy go at it here. And his bandmates make sure that the whole session swings hard. I for one am glad I have a copy of this now, as I missed it originally. It's a corker.