Avishai Cohen, Into the Silence 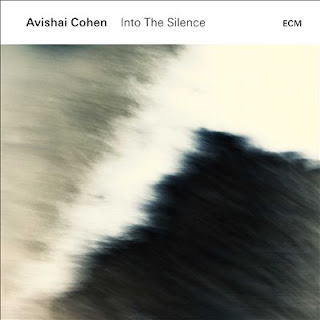 Is there any way to capture what makes an album special in mere words? Ultimately, no. But those of us who wield a pen must keep on regardless. Avishai Cohen's Into the Silence (ECM 2482) has something about it that is beyond simple words, or complex ones, for that matter. It is what used to be called "mood music" tried to do but generally failed. It is what the best of musics can do, but rarely enough. It is a singular thing. Not to be mass-produced, I mean not these notes, these sounds, the presence of Avisai on trumpet, Bill McHenry on tenor, Yonathan Avishai on piano, Eric Revis on contrabass, and Nasheet Waits on drums.

It captures a feel of after. After the garbage trucks with their noisy clatter have gone by, picking up those huge mountains of things we once paid dearly for, what's left now nearly valueless. It is the feeling a year later when someone important to us has passed, and what remains, memories, silence, and absence. It is when we pick up and go on.

Avishai's trumpet has some relation to Miles in his more introspective moments. Avishai has some of that searching quality. He goes into his own space with it all. Drummer Nasheet Waits gives us some beautiful counterpoint to the Cohen expressivity, neither predictable nor commonplace. Bill McHenry builds when called upon his own edifices alongside Avishai, cogent, coherent, lucid, terse. Yonathan and Eric make the most of it all too, with some considerable musicality.

It's about the spaces that embody the after, compositionally meeting the consciousness of that emptiness, improvisationally making that present vacancy sing in the moment, making that feeling very collectively personal.

Oh sure, this is an album that perhaps only ECM could make seem so poignant, that perhaps only Manfred Eicher could capture with such poignant spaciousness. And he does. But like the best recordings there is a mutual sympathy of artists and sound capturers and so creating also the maximum potential sympathy with the artists, the capturers, and the you.

If there is a zeitgeist of now, of how it feels to be sitting in one's chair and wondering where it has all come to, this music captures part of that, a zeitgeist not so much of doing, but after it and before the next doing. It is I think a part of that spirit of the now.

It is a moving aural document that will put you where you already are, but make it resonate vibrationally in some profound ways. It has a remarkable continuity and gives us a part of the art of improvisational expression we do not always get--something wholly unified yet ever moving on.

A record that reaches out to you with total artistry....
Posted by Grego Applegate Edwards at 6:12 AM