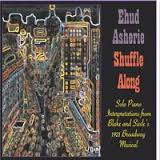 There is a point for those who live when a historical period takes on an otherworldly quality. It becomes a kind of exotic blur because, not only was it before your time on earth, it also no longer has the benefit of a segment of living humanity who can vouch for or comment on it because they were alive then and had some connection with it all. They are gone. Shuffle Along, Solo Piano Interpretations from Blake and Sissle's 1921 Broadway Musical (Blue Heron Records) as played with spirit and aplomb by pianist Ehud Asherie, has that kind of reflections-on-the-unexperienced time for me at least. It was my grandparent's peak era, and so too their peers. My grandmother's cousin played alto sax and somehow was very involved in the music of those days, and that's all I can say because even the idea of who he was or what he did is a blur to me, now. I am missing the facts, mostly.

But as it turned out my first listening experiences as a kid centered around stride piano, which I loved to no end. My dad had a few LPs and I insisted he play them again and again. Who was who or what it was I only came to understand as I grew older. But certainly Eubie Blake was a central figure to the music, destined to be important in the jazz heritage sense but also along with Noble Sissle, mainstream stars of a magnitude we perhaps forget. Their "Shuffle Along" was a big success on Broadway in 1921-22, featuring an all-black cast in 484 performances initially, then touring the States triumphantly for three years after its NY run.

What remains for someone of my generation is a very strong familiarity of the song from the musical, "I'm Just Wild About Harry," which growing up I heard frequently enough, though was it on old movies or what I do not remember. The other songs remained only vaguely familiar or unknown to the likes of us.

So when Ehud Asherie sets about to play some beautiful stride-and-after piano versions of the songs, it turns out that there is much to really appreciate in the music at large. Ehud himself devotes loving care to bringing the songs alive again with plenty of respect for the melody-harmony of the songs, but then shows us some excellent jazz piano creative abilities.

Had Eubie Blake not lived so long, paradoxically, he might be better remembered for his ways in his peak period? I do not know that though I appreciated what he was doing when I chanced upon his records made late in life. No matter. What does count is that this is some really worthwhile music and Ehud plays it with a great artistry!

My grandparents, my grand-uncle, all those grands up in the sky must be smiling when they hear this? It erases some good bit of the blur and brings some important sounds into wonderful focus. It shines! Hear it if you want to dig something worthwhile.
Posted by Grego Applegate Edwards at 6:41 AM