Yells at Eels, In Quiet Waters 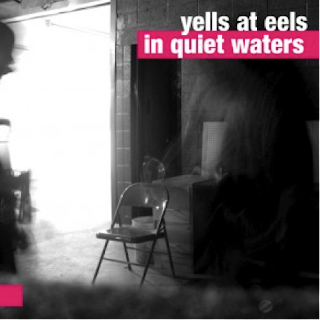 Dennis Gonzalez and his sons Aaron and Stefan return with the latest Yells at Eels opus, In Quiet Waters (fortune 046 033). After more than 15 years together they have a unity that is very much a product of the constant give and take. Dennis of course is a remarkable presence on cornet, C trumpet and various miscellaneous instruments. Aaron has become a titan on acoustic bass and a welcome second-line electric bassist. Stefan is a drummer of considerable power and finesse but also gives the trio an important additional voice on marimba and vibes.

Many of the numbers are by Dennis and they are beautiful vehicles to launch the band into improvisational realms of significance. Aaron and Stefan each contribute a few compositions of their own as well, and they are worthy. One is in two versions, the second a surprising interjection into different waters but I will not spoil it for you. You should let it make you smile unaided by my words.

As the liner notes suggest, this is the band at a peak before a number of  happenings changed the lives of all, one thing supremely wonderful, the other an unwonted affliction that happily was surmounted after some no doubt quite painful times.

But put that aside for the moment and listen. Dennis comes through beautifully with some of his most inspired artistry. There are very few trumpet/cornet players alive that so thoroughly create such a musically original and heated self-expression. He is the complete artist, with a ravishing set of tones and the sort of inspired phrasing that makes him instantly identifiable. His overall concept, his compositional acuity, and his improvisational brilliance have always been a critical part of the Yells at Eels approach and we hear that very nicely indeed once again on this new one.

But then Dennis has given Aaron and Stefan plenty of freedom to develop in the trio context and by now they are formidable parts of this triumvirate. All three create some magical momentum throughout the album. And towards the end of the live set Stefan and Aaron push the boundaries explosively and Dennis dives into the vortex too for some inspired climactics.

In the end we are treated to some outstanding modern avant jazz. One of their best, surely. In the fire-music mode they are unmatchable today. But they have considerable finesse and subtlety too when they choose to go in that direction, and the results there are also of true musical profundity.

This is a must-listen, a must-have album, one of the very best so far in the now not-so-new year. Grab it for sure. A big "whoo-hooo" for this one!
Posted by Grego Applegate Edwards at 6:18 AM