Noah Preminger, Dark was the Night, Cold was the Ground 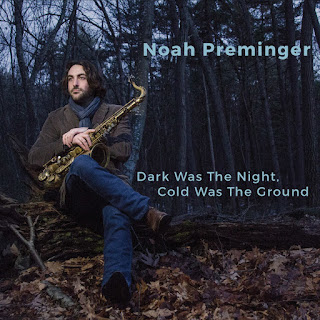 Tenorman Noah Preminger returns on the heels of his beautiful live album (Pivot, see my March 18, 2016 review on this blog) with a follow up, Dark was the Night, Cold was the Ground (self-released). It is like the previous one very much live in its dynamic thrust, though this time it is not in front of an audience. It sports once again his fantastic band, with Jason Palmer on trumpet, Kim Cass on bass, and Ian Froman on drums. Once again it takes on some beautiful blues classics, mostly from the Delta, and does something very nice with them.

The blues perennials are arranged for the quartet in ways that proclaim their continued relevance to the jazz of today, and then they open up a space for the quartet to burn wonderfully well.

Jason Palmer is a trumpet player who has all the tools and sensibilities to make himself a key part of the quartet. He sounds great. Cass and Froman give us truly exemplary rhythm team fire. And Noah sounds increasingly sure and personal, a tenor sax centrepiece among the "new" players out there. It wasn't like he wasn't playing great, arcing lines in his earlier recordings, but with this band and the blues roots and freedom they dive into with such enthusiasm, it is contemporary jazz on a wonderfully high plane now. Not just Noah, but an extraordinary working band and a blues projection that never lets up yet gets a burning, freely heated treatment.

Fantastic! Noah is skyrocketing.
Posted by Grego Applegate Edwards at 5:45 AM