Jorrit Dijkstra, Never Odd or Even 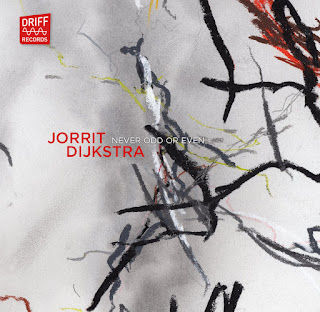 Solo albums in the later realms of avant jazz can go a number of ways, so that you can never be sure what you have until you give the music a close listen. Of course there are outings that consist of the artist doing what he or she does without any accompaniment, and those can be great if the artist is worthy and the moment right, but then there can be music that functions as a coming together of different elements, like a modern painting done in various stages and showing various performative segments.

Saxophonist and composer Jorrit Dijkstra gives us something worthwhile in the second category on his recent solo effort Never Odd or Even (Driff Records CD 1503). Jorrit creates an ever-varied tapestry of sound expressions and sound colors on the 15 segments that comprise the full totality. His alto, a lyricon, an analog synthesizer and effect pedals are all utilized either in real time or with several overdubs to create episodic, aurally distinctive contrasts that maintain a spontaneity and freely articulated presence rather than some sort of formal structure.

So by means of immediate overdubbing on top of an initial improvisation we get the feeling of multiple instrumentalists engaging in a virtual "now." Or alternately Jorrit feeds his live signal into effect devices that respond with layered textures in real time.

Either way the music has the power and imagination one expects from Jorrit. It is music to expand the confines of the temporal givens of the moment, that inscribes multiple sonorities into our listening selves, that provides us with multiple ponder points of lively musical imagination.

It is a resounding success in the end. Nothing sounds tentative but rather forms a part of a cohesive and avant adventure, a totality that ranges far and never falls short.

Such solo ventures succeed in proportion to the creative opening up and inventive flair of the artist. It is all here in abundance. Listen and you'll travel to the various limits of musical imagination, from the perspective of the best listening point possible, the center of it all.

Warmly recommended.
Posted by Grego Applegate Edwards at 6:15 AM