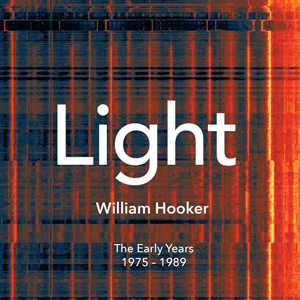 If there's one thing to be said about drummer/bandleader William Hooker, and actually of course there are many things, it is that from the beginning he's never been reluctant to express himself fully on the drums. Combine that with his very musical sense of the possibilities and his abundant technical facility. It all means that he is one of those instrumentalists in the new jazz who you can identify pretty quickly in a "blindfold test," maybe after only a few notes. He is that kind of one-of-a-kind artist-innovator.

And as a bandleader he gives the sidemen plenty of room, plenty of freedom to express their own personal sounds and approaches. And so a performance of his group virtually always involves some original and collectively personal expressions, as varied as the makeup of that particular group unit.

His importance on the scene goes back a ways, and nicely, we get to revisit or get into some of his foundational music on the very welcome 4-CD box set Light, The Early Years 1975-1989 (No Business NBCD 82-85).

On it we get some excellent solo spots and some small group sessions, some originally available on William's Reality Unit Concepts label, and a good bit of unreleased material, too, altogether giving us a vivid picture of the artist and his bands over those critical years.

There is a good deal of supercharged avant jazz energy and smarts to be heard on this set, and it all serves to frame the period, the excellence of William Hooker's melodically open drumming and the fire and conviction of his collaborators.

The sound is very decent, the music inspired and abundant. This set gives you an excellent introduction to William Hooker's art, or fills in any blanks you may have from this important era of the New York scene. Either way, it is some fine free music! Grab a copy if you can.