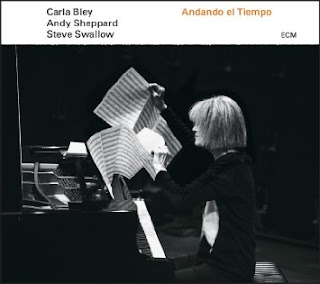 This May 11th marks the 80th birthday of Carla Bley. She has long been a titan in the new jazz composition and performance world, and now we increasingly rejoice in her very productive longevity. To celebrate Carla and her brilliance ECM is releasing a new album, Andando el Tiempo (ECM 2487). There is also a birthday event on the 11th of this month in New York's Steinway Hall at 7 pm if you are in the area.

The album brings new clarity and poignancy to her trio gathering of Andy Sheppard on tenor and soprano and Steve Swallow on electric bass. After 20 years together they have become a totality of directional achievement, a oneness of expressive thrust that is remarkable to hear. The compositions, as Carla remarked in a recent interview, in effect are "really big band music reduced. I have to play way over my head and so do the guys. They have to take on a lot more than they would if I still had a big band."

And so we get a great deal of compositional and improvisational expansions from all three. The result of course is that Carla the pianist as well as the composer is very much more out front than in the early days. And she sounds each note and each chord beautifully, significantly. Steve Swallow's bass guitar has both a foundational and a melodic role to play and he does it with an artistry unparalleled by any other living electric bassist. Andy Sheppard has come a very long way since his beginnings as well. His is a presence of pristine soprano and tenor lyricism and bite. All together they now make for a most remarkable musical entity.

The new album features all new Bley pieces and they are very much astonishingly impactful and communicatively lyrical yet bracing vehicles, each a gem of novel yet characteristically Bley-like form.

This is a marvelous recording that I do not hesitate to recommend it to those who love her but also even to those less familiar. It is a cornerstone sound capture of Carla Bley and the trio in the latest period. Outstanding.
Posted by Grego Applegate Edwards at 6:04 AM