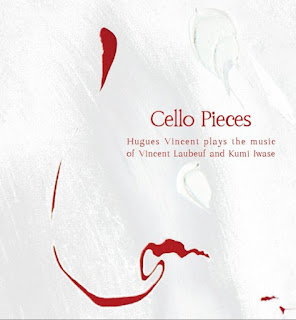 Hugues Vincent is one of the prime cello exponents in the avant garde worlds today. He makes of extended techniques a natural wholeness of outlook that has great syntactic logic but also a heightened expressionist impact. I have covered him in various contexts on these pages and today I am back with a special new one, Cello Pieces: Hugues Vincent plays the music of Vincent Laubeuf and Kuni Iwase (Zpoluras Archives ZACD 1502).

Iwase's three solo pieces give us a beautifully extended series of reflective and reflexive moods, with Vincent moving from phrase to phrase with ever-varying color techniques, in essence posing a particular sound world and then answering that with a very contrastive response, which in turn sets up a question-event that is answered with yet another response. It is no doubt difficult music to play properly and thanks to Vincent's extraordinary technical and expressive control it comes off beautifully well.

The outer works bring in prerecorded concrete sounds that engage in dialogic relations with Vincent's role. "Telle" sets up various cello sound-event motifs which recur in various ways along with more singular color-tone events, all getting an ambiance with the ins-and-outs of the almost world-window-heard-from-a-distance recorded audio quality.

All of this music benefits from the compositional directionality of the works themselves, helping to contextualize and interconnect the dots of virtuoso cello sonic extensions and make of it all a presentational whole.

This is avant music on the very nether of the cutting edge, with incredible motility and multi-voiced loquaciousness from Hugues Vincent and provocative contrasting directedness from the composers.

It is no doubt not for everybody out there, but it IS a beautiful recital, a series of very outside engagements in sound color that will hearten and intrigue lovers of the avant and virtuoso avant cello alike.