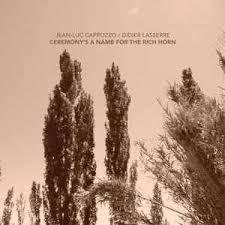 No Business Records clocks in with a decidedly different 20-minute EP of trumpet master Jean-Luc Cappozzo and drum virtuoso Didier Lasserre live at la Maison Peinte on the occasion of the 10th anniversary--of what I assume is their mutual collaboration--in December of 2014.

Ceremony's A Name for the Rich Horn (No Business NBEP 3) gives us the title improvisation, an almost ritually constructed, gradually building, instrumentally distinct free improvisation. Didier initially plays space-surrounding rhythmic tattoos that almost remind one of the role of the cymbals in a Tibetan Buddhist chant, with silence surrounding the sparse but insistent pulsations and Jean-Luc gradually appearing in a series of rather brilliant expressions on trumpet and flugelhorn. The entire piece accumulates its sound fingerprinting around the freely developed "ceremonial" articulation of this simple premise, giving us dramatic silences and pungent sound blocks, meditative, reflective, introspective and then at times bursting forth.

It is a most uncanny performance, neither expected nor formulaic. It is singular. It is focused. It is almost spooky. All of that in a space of 20 minutes.
Posted by Grego Applegate Edwards at 6:44 AM