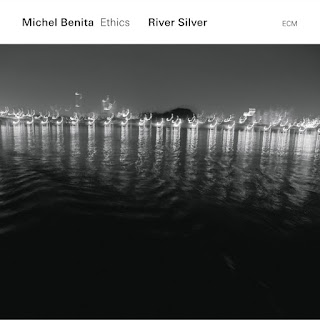 Bassist Michel Benita steps out with an album that features his own group Ethics--on the recent album River Silver (ECM 2483). It is a very listenable yet contentful amalgam of world music and lyrical ECM jazz, with bright contrasts between the Algiers-born bassist, Japanese koto adept Mieko Miyazaki, Belgian flugelhornist Matthieu Michel, Norwegian guitarist Eivind Aarset and French drummer by way of Istanbul Philippe Garcia. Each brings a special sound to the whole in a program that is widely eclectic--a Northumbrian piper composition, something from Norwegian composer Eyvind Alnaes, as well as an original by Miyazaki and a number of tunes by Benita himself.

What you get is an elaborate, spacially open, exotic melange of meditative yet pulsating interactions that clearly belong to the ECM lineage yet expand that with new possibilities and potentials very nicely realized.

Matthieu Michel's flugel is beautifully burnished, Mityazaki's koto is poignantly marked and melodic, wrapped in blankets of sound from Aarset's enhanced guitar and the artfully punctuated bass roots and flourishes of Benita, all getting subtle percussive pulsating washes by Garcia. The arrangements have great textural diffuseness and nicely intricate blendings of an unprecedented richness. All is lyrical yet more in the mysterious mode than the sentimental, more spacey than heartfully gushing, more pan-harmonic world infused than regionally bound.

It is one of those albums whose mellow quality acts as a container for musical sophistication inside folk straightforwardness. Even within the ECM world this one stands out as stubbornly singular.

I found myself responding increasingly to its sun-clear wiles. This is not grandad's bop but it is a kind of ensemble jazz of purposefully understated, moving breadth. Hear ye this!