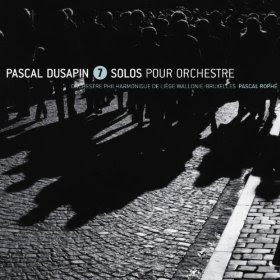 Pascal Dusapin was born in 1955. That doesn't make him exactly a youngster, but considering, say, Elliot Carter (who has been productive for very many years), Dusapin (one hopes) has a good time to come where he can continue to extend his music. As it is, the Pascal Dusapin of the Seven Solos for Orchestra is a composer fully matured and extraordinarily eloquent in his orchestral writing. The seven solos were written over a period between 1991-2008. The gathering together and performing of the entire cycle for the first time on disk makes it clear that this is important music.

Unlike Bartok's Concerto for Orchestra, here we have music where sonority takes precedent over group virtuosity.

The compete set of Solos we've been discussing is out on a 2-CD set (Naive 782180), with Pascal Rophe conducting the Orchestre Philharmonique de Liege Wallonie Bruxelles. It is concentrated, focused music and the performances are quite exciting. Maestro Dusapin writes music that has a kind of inexorable logic. The music is very modern and uses melodic-intervalic-harmonic cells as ideas that unfold with a kind of linear reasonableness. Like Varese before him, Dusapin creates a musical syntax that has movingly expressive content but also flows out if itself with speech-like clarity. The music-speech we hear is his own. Very much so.

Each of the fairly short pieces is a gem; together they make a marvelous impression on this listener. Dusapin crafts inspired music. Listen to this one and I think you'll agree. Most highly recommended. . .
Posted by Grego Applegate Edwards at 4:57 AM