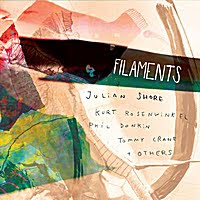 There is contemporary jazz to be had out there that has a lyrical melodic-harmonic brightness. In some ways it comes out of the Brazilian nexus that initially hit the States and the jazz scene in the '60s and has been internalized ever since. Then there are the lyric sensibilities of Vince Guaraldi and early Keith Jarrett, the ECM sound, Pat Metheny, all contributing something important to this kind of music today.

Julian Shore's album Filaments (Tone Rogue Music) fits right into this development, rather brilliantly in fact. It's a disk of Julian's brightly shimmered music, with Julian on piano, adding much in that wise, some lovely wordless or otherwise vocals from Alexa Barchini and/or Shelly Tzarafi, a good solid rhythm section, some horn soloists appearing succinctly here and there, and Kurt Rosenwinkel in a marvelous guitar fettle for three cuts, Jeff Miles sounding good also for three others.

It is beautifully tuneful jazz. And it is original in its own way. A stunner.

Posted by Grego Applegate Edwards at 6:47 AM