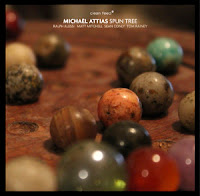 By now the avant-stream in contemporary jazz has a number of facets going for it. One of them is highly compositional but with plenty of solo space, freedom and construction joining hands for a new meld.

Michael Attias's disk Spun Tree (Clean Feed 261) is an excellent example. It seems that the structural innovations of the best of the AACM composer-instrumentalists, George Russell and Bill Dixon's compositional approaches, influences of new music and the energy of the new thing classics have become synthesized in new and rewarding, even exciting ways. Spun Tree fits right in there among the best.

The band on this album is relatively small, a quintet, yet the way the voicings work it often sounds fuller. Michael is on the alto and he has some excellent support from Ralph Alessi on trumpet, Matt Mitchell on piano, Sean Conly on double bass, and Tom Rainey at the drums.

They run through eight composition-improvisations with great spirit. The composed parts don't fall into head-solos-head patterns so much as appear as vignettes to catalyze improvs and comment on them and vice versa. I won't say this sounds like Ornette's classic Free Jazz or Trane's Ascension. It doesn't. But the structural innovations of those classics have been expanded on and taken further in the complexity of how the music works.

Great compositions, soloists and pacing make this album a listen you should not miss! Michael Attias has it going for him.

Posted by Grego Applegate Edwards at 6:43 AM