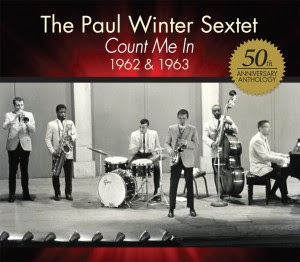 Paul Winter is best known these days for his innovative, proto-fusion/post-fusion Consort. Many of the members of Oregon started there and both their and his own concepts have made a large impact on the scene.

Perhaps you (like I) never heard some of the first recordings of Paul's. They a part of a 50th anniversary anthology that adds 14 unreleased cuts for a very comprehensive 2-CD look at what he was doing in 1962-63. The Paul Winter Sextet's Count Me In (Living Music 44) is what we have, and it's an excellent listen.

Most of the players' names are not well-known today, except for the presence of Chuck Israels, Ben Riley, Harold Jones and, for a few cuts, Cecil McBee, Freddie Waits, Jeremy Steig and Gene Bertocini.

Otherwise it's a sextet of Winter on alto, Dick Whitsell, trumpet, Les Root or Jay Cameron, baritone, plus rhythm.

The soloists are quite decent, including Paul in a very more boppish vein than later, but the emphasis is on somewhat cool, well arranged compositions. It's substantial music, it swings, it does not sound especially dated. There's even a White House concert from 1962.

I wasn't sure at all what Paul Winter was up to then, but I am very glad to know now. It's a fine intro to early PW.