Mike Longo Trio, A Celebration of Diz and Miles 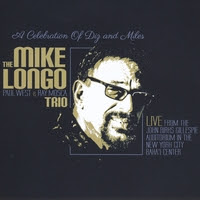 Listening to Mike Longo and his new album, A Celebration of Diz and Miles (CAP 1033), I keep asking myself, "How is it that Mike has been basking in obscurity for a number of years?" I don't have the answer in this space and even if I did, the remedy is simple. Listen to what he is doing right now.

Here we have him and his trio, with Paul West and Ray Mosca, bass and drums, holding forth live at the John Birks Gillespie Auditorium of the Baha'i Center in New York, playing grizzled old classics associated with Diz and Miles, songs played to death, and yet Longo finds something very cool to say with them. That's jazz, right? I am not being flip.

"All Blues," "A Night in Tunisia," these are the classics that Diz and/or Miles played night after night back in the day, and of course Mike (with Diz) did, too.

To make them seem fresh, to solo with such imagination, who would expect it? Of course anyone who has followed Mike over the years. Some of us have lost track. Here is the chance to catch up. This is wonderful Longo.