The Whammies Play the Music of Steve Lacy 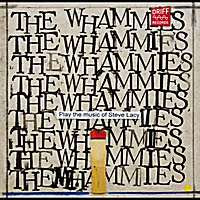 Steve Lacy had such a distinctive style on soprano. His groups, especially from his middle period on, had a very distinct way about them as well. These factors were so prominent in his later music that I, at least, have tended to associate them as a nearly inextricable part of his compositions. Like Lacy's own treatment of the music of Thelonious Monk, a change in context for the compositions can help one listen to the melodic-harmonic implications of the compositions in themselves. Just as Lacy and others gave us an earful of Monk-as-composer that helped us more appreciate his music, so now this engaging recording at hand.

The Whammies are doing the same thing for Steve Lacy's music on The Whammies Play the Music of Steve Lacy (Driff CD 1201). Who are the Whammies? They are an all-star avant unit of Jorrit Dijkstra on alto and lyricon, Pandelis Karayorgis on piano, Jeb Bishop on trombone, Nate McBride on bass, Han Bennink on drums and, for half the numbers, Mary Oliver on violin or viola.

These are artists known for their improvisational personalities and for the most part composers of merit in their own right. They hommage the hommagian, so to speak, by including one Monk number, "Locomotive." Otherwise it's Lacy all the way.

And it's not "straight" Lacy for that matter. It is arranged, freely articulated and improvisationally packed music of a very high order, individually and collectively. The set reaffirms the importance of Lacy the composer while also giving you a great ensemble going to it.

Don't miss this one. I hope the Whammies keep it going. It's a great combination of players!!