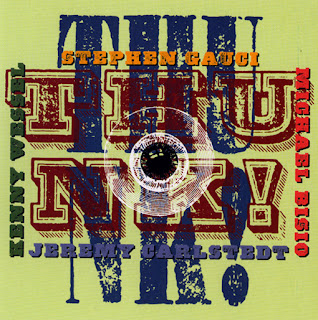 As a companion piece to the Whammies review today, we go to a program of Thelonious Monk arrangements and improvisations around them that keeps things fresh and exciting. I speak of Stephen Gauci and his album Thunk! (Not Two MW868-2).

Stephen Gauci is a tenorist that's getting things very together with a series of his own recordings and as a member of Michael Bisio's group. This time out he gets a nice combination of self, Mr. Bisio on bass, Kenny Wessel on guitar and Jeremy Carlstedt on drums. I've seen that they've been gigging around the city. Alas I've never have been able to catch them due to everyday snarls and SNAFUs.

But the album gets their music down for us all to hear. We have a good sampling of classic Monk tunes, like "Ruby My Dear" and "Nutty", only it's arranged subtly, differently, sometimes with a straight-eight funk feel, sometimes by extending a harmonic section, adding an ostinato, all good ideas.

Stephen sounds great, Kenny Wessel really comes on, Michael Bisio is his usual outstanding self and Jeremy Carlstedt does everything right.

So it's not "just" another Monk tribute. These guys have been playing the tunes for a long while and the arrangements seem like they evolved out of thinking about and dealing with the music, not as a grafting.

So it all rings out true and plumb without missing soul and expression! Stephen Gauci is a player you need to hear and this is a perfect place for that. Listen up and liken it up? You no doubt will.

Posted by Grego Applegate Edwards at 7:25 AM