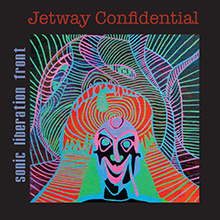 Sonic Liberation Front play their own kind of Afro-Cuban-influenced avant jazz and they do it very well. We reviewed their last album Meets Sunny Murray on these pages (type in search box for that one) and, as good as that one was, the new one, Jetway Confidential (High Two 030) is even better. Afro-Cuban influenced hand drumming meets large band avant jazz composition meets collective and individual soloing of merit.

These folks are Philadelphia based, a sort of new Sun-Ra-like ensemble geographically and stylistically, only they sound very much like themselves. Drummer-percussionist Keven Diehl writes most of the compositions and is a driving force behind the 23 member band. There are vocals now and again that seem to relate to traditional Cuban Lukumi music.

This is top-notch avant music that anyone who digs Ra and after will get behind! Catch it.